After a chaotically historic week, sports was the perfect thing to keep me distracted. Growing up when I watched sports games, I would take notes in my sports journal. I even went as far as to draw graphs for NBA stats like points, assists, rebounds, and steals. sports has always been one of my strongest passions. My dream to be a sports writer and analyst was my drive behind majoring in Journalism and Mass Communications at North Carolina A&T.

Heavie’s Sports Corner will be a weekly feature to my blog as I continue my journey to becoming a sports writer. 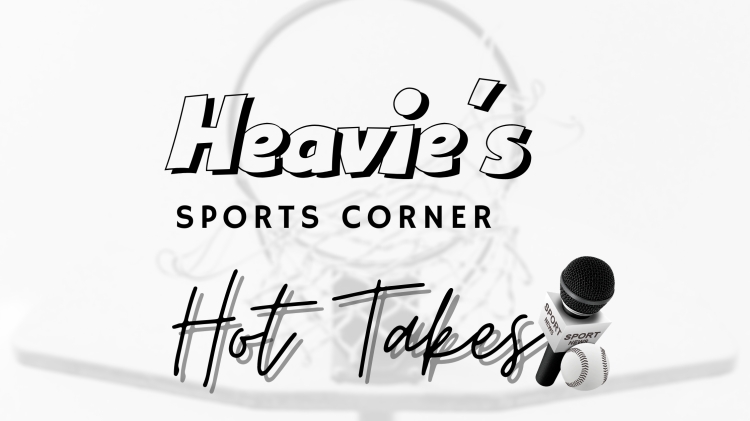 For years we’ve seen Alabama head coach Nick Saban lead his teams to national championships, having coached star athletes like Jalen Hurts and Derrick Henry who currently play in the NFL. Nick Saban cemented his legacy yesterday passing Bear Bryant for the most national titles in CFB history.Nick Saban wasn’t the only one to make history, his players did too.

Despite missing most of the second half after injuring his hand in the third quarter, with 12 catches for 215 yards, Heisman Winner Devonta Smith won the Offensive MVP award after scoring 3 touchdowns. RB Najee Harris broke Alabama’s TD record after scoring his 29th touchdown of the season during the game. The record was previously set by Titans RB Derrick Henry.

FINALLY. The Buffalo Bills won their 1st playoff game since 1995 with their 27-24 victory over the Tennessee Titans. Despite the loss, this was a good season for the Colts, after winning 11 regular-season games for the first time since 2014. Time will only tell what the future holds for the Colts next season, as QB Philip River mulls retirement.

This was a game that I was looking forward to.The Seahawks were ill-prepared for the Rams defense. All-Pro tackle Aaron Donald missed most of the second half with a rib injury he suffered in the third quarter, but that didn’t stop the Rams defense from putting pressure on Seattle QB Russell Wilson and his WR’s.

The Rams also had some offensive challenges having to rely on their defense throughout the game with injuries occurring at the quarterback position. A fumble late in the fourth quarter sealed the Seahawk’s defeat 30-20. The Rams will play the Green Bay Packers Saturday in the divisional round. Who will be the Rams starting QB?

The combination of WR Antonio Brown and 5x Super Bowl Champion Tom Brady led the Tampa Bay Buccaneers to a 41-23 victory over the Washington Football Team. This was Tom Brady’s first season with the Buccaneers after playing for the New England Patriots his entire career.

Brady performed well, throwing for 381 yards and 2 touchdowns while making history as the oldest quarterback to ever play in a playoff game. Comparing the two quarterbacks this was Washington Football Team QB Taylor Heinicke’s first playoff game in comparison to Brady’s previous 42 postseason games. Taylor Heinkine was the starting QB, taking the place of Alex Smith who was sidelined with a straight right calf.

The New Orleans Saints defeated the Chicago Bears 21-9 in their Wild-Card game, creating an interesting divisor round matchup.

This will be the oldest quarterback matchup in NFL History.

I don’t think anyone anticipated the outcome of the Pittsburgh-Cleveland game. Throughout most of the regular season, the Steelers dominated the AFC, they even went undefeated for a short period. The Steelers were the favorites to win. Leading up to the game Steelers WR Juju remarked that these were just the “Same Old Browns” when discussing the upcoming match.Well.. the Browns shocked everyone except themselves.The Steelers underestimated Cleveland’s determination to get a playoff win. Browns QB Baker Mayfield threw for 263 yards with three touchdowns leading the Browns to defeat the Steelers 48-37. This was Cleveland’s first playoff victory since 1995.

Read until the end for my picks on the divisional round.

After a 2019-2020 NBA season at the ESPN Wide World of Sports Complex at the Walt Disney World resort in Orlando, Florida games are back being played at NBA arenas for the 2020-2021 season, but things haven’t gone on without a hitch. Safety protocols have been an incoming challenge as the season has unfolded. A surge of positive coronavirus tests across the league has lead to games being postponed and limited rosters for games. Just this week, 4 games were postponed because of COVID-19 issues. Star players like James Harden and Kyrie Irving, among others have run into issues with COVID-19 safety protocols.

In December, Rockets PG James Harden was fined $50,000 and missed a game for violating COVID-19 protocols after he was seen parting at a club, massless.

The NBA has recently announced revisions to their COVID-19 safety protocols. Some of them include, players having to wear masks on the bench, no pregame meetings in the locker room longer than 10 minutes, and pregame and post-game interactions between players are now limited to elbow and fist pumps.

Aside from COVID-19, The NBA is back.

This season the games have been highly entertaining. With usual stars like Steph Curry, Lebron James, Kyrie Irving and dominating the league.

Trades have been crazy across the league during the quick offseason, even mid-season. Rumors about James Harden’s unhappiness in Houston has to lead to chatter on if a trade will happen. His longtime friend and teammate Russell Westbrook were traded to the Washington Wizards for John Wall in December after both point guards expressed unhappiness with their teams.

Despite all the trade rumors, Harden has still been on the court with new teammate John wall. John wall made his debut on the Rockets in late December after missing nearly 2 years with an injury. He scored 22 points, 6 rebounds, and 9 assists in his return to the court.

Chris Paul is on the Pheonix Suns if you didn’t know.  Chris Paul was traded from the Oklahoma City Thunder to the Phoenix Suns in November. The Thunder received Kelly Oubre Jr, Ricky Rubio, Ty Jerome, Jalen Lecque and a 2022 first-round pick from the Suns.

This is Paul’s second team in three years after being traded from the Rockets to Oklahoma in 2019.

Besides Lebron and AD, the Lakers have a slightly different roster this year. Rajon Rondo plays for the Atlanta Hawks and Demarcus Cousins plays for the Houston Rockets. The Lakers also made an addition to the team signing former clippers player Montrezel Harrell.

The Los Angelos Clippers are looking for redemption after a disappointing performance in the NBA bubble. After firing head coach Doc Rivers, the Clippers hope their future is bright with new head coach Ty Lue. Ty Lue went from assistant to head coach of the Cavaliers in 2016 after David Blatt was fired as head coach midway through the season. He eventually lead that Cavaliers team to an NBA championship in a historic 3-1 comeback against the Golden State Warriors.

Ty Lue isn’t the only new team head coach. Former NBA player Steve Nash is now the head coach of the Brooklyn Nets. The Hall of Fame PG was hired as head coach in September. His high sports IQ will come in handy with Kyrie Irving and Kevin Durant on the roster.

Kyrie Irving has been all over the headlines recently, not just for basketball. During the peak moments of last year when BLM movements and activism were ramping up, Kyrie Irving was one of the leading social activists from the sports world. If you can call recall, Kyrie was the most outspoken about NBA players boycotting the NBA bubble season to focus on social justice.

To end this week’s Sports Corner

I’ll give my picks for the Divisional Round of the NFL playoffs.

As a Green Bay Packers fan, I obviously have to pick the Packers. I would never bet against Rodgers not when it’s proven that he can throw game-winning Haily Mary’s. Realistically though, the Rams defense has me worried. Aaron Donald has been known to give A-Rod trouble.

I am anticipating that Lamar Jackson will keep the momentum for the last game. I’m picking the Ravens. Defense win games.

This will probably be the most interesting matchup of the weekend. Brady vs. Brees. Because Brees had dealt with some rib injuries throughout the regular season, I’m choosing the Buccs.

Be on the lookout for Heavie’s Sports Corner, every Tuesday or Thursday!

Hi, I'm Heaven 'Heavie' the creator of HeavieTalk. Welcome to my blog. Unlike other blogs, HeavieTalk has no specific niche. I will cover a variety of topics such as mental health, self-care, sports, politics, and anything else that I come across on my journey as a black millennial college student. View more posts